A (red) herring in the shower 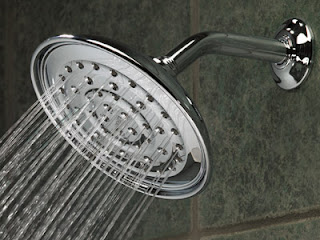 A few days ago I was asked by Tom Vanderbilt, author of the very readable and interesting book Traffic

, to write a piece for his blog summarizing my thoughts on bicycle helmets (thanks, Tom).

Karl McCracken has written some interesting words on the subject as well today. The thing I'd like to pick out of his post is the issue of showers. Like Karl, I have again and again heard people say "Oh, I'd love to cycle to work but we don't have any showers so I can't." Let's have a little look at this, shall we?

When I was doing work on how drivers overtake bicycles, I needed somewhere in Bristol to store my bicycle between testing sessions. I called Sustrans and asked them if they had somewhere I could keep my bike. "Yes, we'll find somewhere," they said. "Just turn up."

When I arrived, where do you think was the one place in the building - a building where everybody cycles to work - that was unused? The shower. And sure enough, that's where the bike was stowed.

Item 2. Last year I attended a meeting at the CTC's headquarters in Guildford. Again, this was a building where everybody cycles to work each day. I saw their shower, and I don't think it had ever been used once.

I think we can learn something from this. Here are two buildings in which the whole staff cycle in every day, and in neither is the shower used. It is clear that showers are a red herring. Like bad weather, they seem a huge concern to people who do not cycle but, after only a little experience, everybody realises it is just not the issue they thought.

So heed my words, people! Of course you'll be a little sweaty the first couple of times you cycle to work because you're not fit! Give it a fortnight and it will no longer be an issue. My workplace is on top of a mountain and I've never showered after getting there. If I have been a little sweaty, simply rubbing it off whilst it's still wet is all that's needed to avoid any smell. And cyclists: spread the word. We need to fight this barrier by showing people that it's just a non-issue if they will only try.

Or could it be that people know showers aren't really an issue, and use a lack of showers in their workplace as a way of justifying a no-longer-acceptable preference for driving? Oooh, what a cynical thought.

Email ThisBlogThis!Share to TwitterShare to FacebookShare to Pinterest
Filed under cycling, transport

Well done Ian. I like the "How We Drive" post you linked to. Seems like there is a flurish of such articles on the web the last few days. Or maybe I'm just looking for them ;-)

Your point about wiping the sweat off ASAP is the key. Body odour comes from nutrients in the sweat being decomposed by bacteria on the skin. So if you wear breathable, wicking, clothes while you ride, the sweat gets taken away from the bugs, and if you wipe dry as soon as you stop, so much the better.

Well observed. I cycled to work in an office equipped with showers for many years but never felt the need to use them. Nor did anyone else who cycled in.

Non-cyclists will use all sorts of excuses for not cyclng, including of course "the roads are too dangerous, it's too far, it's too hilly, there's nowhere safe to lock the bike, I've got too many things to carry with me, etc.".

But those who do cycle find ways of resolving those issues, even in an environment that is cycle hostile. So maybe the difference between cyclists and non-cyclists is mainly one of attitude to problem solving.

Cyclists are typically pragmatic, adventurous, non-conformist, self-sufficient and highly motivated. Non-cyclists tend not to have these qualities. So maybe trying to persuade non-cyclists to become cyclists is doomed to failure?

And what if the cycling environment is so transformed (with say a comprehensive network of cycle tracks) that it appeals to non-cyclists but becomes far too regulated, tedious and slow for current cyclists?

That seems to be a real threat from arguably misguided initiatives like Cycling Demonstration Towns.

From empirical observations it seems that sweating/showering is mostly an issue for compulsive helmet users...

Showers... yes. I once showered after cycling to work. Basically to try it out. However, it's a waste of time. It's also one of those things that doesn't scale so doesn't fit into mass cycling culture.

As for the hypothetical idea that Chris puts that a comprehensive network of cycle paths would somehow work only for non-cyclists and decrease cycling amongst cyclists...

That's a really daft argument. You really ought to come and visit the Netherlands, Chris. The "non-cyclists" do cycle here, there's much more cycling in general than anywhere in the UK, and also much more interest in cycling quickly and for sport.

Bit late on commenting on this, but as a CTC staff member, I can assure you that the showers at our Guildford office are very heavily used. Often there a lengthy queues for showers in the mornings - if you're not there by 8.30 on a fine day you'll definitely have a bit of a wait. Several members of staff cycle long distances to work. I cycle the 30 miles from London once or twice a week. If I cycle the 4 miles and take the train of course I don't bother with a shower but 30 miles at moderate pace does leave one needing a bit of a cleanse.

The problem of course is that most people in Britain (and particularly London) are travelling too far for work. The costs of housing means people are living 10+ miles from home. Atkins found that London cycle commuters they studied on average travelled 6 miles to work, whereas the average cycle commuter across the UK travels just 2.7 miles.

I think the cut-off for showering being perceived as necessary could be estimated as a function of distance + speed > x, modified by how formal your work environment is.

The latter of course brings up the prickly issue of whether you need special clothes or not. I'm with Yehuda Moon on this one: http://www.yehudamoon.com/index.php?date=2009-01-09

It's a bit different here in Aus. When I rode to work this morning, it was 26 degrees and the humidity was over 90%. On the way home, the air was dry, but it was 39 degrees (Celcius). Sydney also has plenty of hills - big steep hills. On a short journey (say 5km or less) on flat ground in the early morning, a shower should not be required. However, a 15km commute over several ranges of hills when the air is almost liquid with humidity produces a desperate need for a good long shower after arriving at work. In our building, we have to queue for the showers. We had a revolt recently when the Safety Nazis threatened to take away the spot where we dry our towels.

One of my fellow commuters, who comes in from about 30km away and faces some enormous hills, has a magnesium drink on arrival in order to replace all their precious bodily fluids. We sweat like crazy down here.

I've worked for the Australian gvt, who provided showers at our work. They were heavily used by the cyclists, especially those who came from more than just a few ks away, and especially in summer..

I've worked for the state gvt, who provided great bike parking, but just a few inconveniently located showers. Most people caught the train.

If you're going to shower in the morning (ie. in places other than Britain and France), ;), it makes more sense to do so post-ride (at work) than pre-ride (at home).

I think there's another conclusion about English people not using the showers. :)
My experience: 5-10degC, flat, <5km = no shower required, but above that it's too whiffy.
Most excuses I get are: too dangerous, too hard to carry my clothes in, takes too long to cycle, not practical etc. I ride in every day, unless its raining in the morning.

I'm also in Australia and always used showers after cycling to work, just because it seemed to be what everyone said you needed to do.

Then I lived in Amsterdam for five years, where the idea of showering at work was unheard of and everyone cycled in their normal everyday clothes. Fair enough, the distances are smaller and so you can ride slower and take care to sweat less. But not everyone in Australia is rising 30km each way in the heat.

On a similar vein, the 'special' cycling clothese thing really bugs me. Trying to be helpful, I've seen cyclists distribute lists of all the specialist gear and clothing required to ride in wet weather, cold weather, hot weather. Again in Amsterdam, I wore my office clothes, snow, hail, rain or shine, with high heels.

I now ride like this back in Australia (Melbourne) and am relieved to say so do a lot more people.

There's an old joke in Australia - Q, If there are some English people coming to visit your home, where do you hide your money?
A, Under the soap!

Implying of course that the English don't wash as much as Australians.

But seriously, given the climatic differences here in Australia many of us (except perhaps Melbourne and Tassie) do have longer distances and much hotter weather that make showers at work essential.

But even where we do have showers at work & bike facilities, we get people who then still use the excuse that they don't want to use use "dirty" showers at work with everyone else and catch tinear or something.

The showers issue is as you say often an excuse.