Passive smoking on the road - but what's it called? 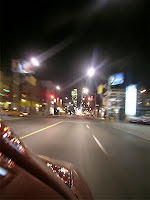 A few days ago I wrote about attending the Cycling and Society symposium and mentioned Jake Voelcker's work on drivers' responsibility for harming others.

Jake made a really interesting analogy between driving and passive smoking. Just as the person sitting next to a smoker gets all the risks of smoking with none of the pleasures, so the pedestrian or cyclist who shares the road with a driver is put in danger by the car but gets none of the benefits in return. And in both cases, the danger is transferred to the recipient without their consent.

I suggested to various people at the symposium that campaigners for vulnerable road users need to start mentioning this at every opportunity, and suggested that to extend the analogy we should use the term passive driving. However, although everyone thought it was a good idea for us to highlight the ultimately selfish nature of driving, I was clearly in a minority of one with the name: everybody else thought "passive driving" was a rubbish term which didn't explain things at all.

So what do you think? What should this phenomenon be called? A good suggestion could quite seriously earn you immortality, as there's a definite need for this term to exist. Let me know.

How about the Cyclist's dilemma, as a take on the Prisoner's dilemma, where if a cyclist cooperates properly with the Rules of the Road then they are disadvantaged by being at the mercy of car drivers, who they then require to adhere equally for their own safety. A bit like the two prisoners mutually agreeing not to grass on the other in the Prisoner's game. If the driver should renege on this unspoken agreement, as many do, either by way of intoxication, recklessness or aggression (a tiny minority at any rate but present nevertheless) then the cyclist suffers a greater penalty than the car driver just as the prisoner's accomplice who breaks their agreement is penalised less heavily for shopping his partner in crime. This is evidenced all the time by the paltry reprimands and judgements passed out to motorists responsible for serious injuries and fatalities of cyclists. The reverse is never true though, since the worst a cyclist is capable of inflicting on a motorist is likely to be property or vehicle damage, be it accidental or malicious, should they break the "agreement" whatever the motive and by whatever the means used.