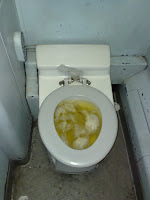 A few weeks ago I wrote about the lamentable arse-fest that is First Group's Portsmouth to Cardiff rail "service", and how they are vastly bloating their profits by running a monopoly as poorly and as cheaply as possible knowing that we have nowhere else to go (with full government complicity). In that entry, written well over a month ago, I mentioned that one of the trains I regularly find myself on has two toilets, one of which had been out of order for weeks. Well, it's now at least three months since that toilet broke - a whole quarter-year in old money - and it still isn't fixed. But my joy has reached new heights, because the one other toilet on that train is now buggered too, as you can see! So for the foreseeable future, there will be no toilets for the hundreds of people on that train! Hoorah for First! Hoorah for Bratislava service at Tokyo prices!

The thing is, I find myself in a real bind. Traditionally, people like myself, who work in transport analysis and so point out that people drive too much, have suggested that people should make more use of public transport. But how can I go on telling people they should use public transport when the monopolistic arse-bags who have seized all the services in this country can't be bothered to uphold their end of the deal by providing useful and non-sub-human services? (In case you don't travel by British train, the toilets are just a poignant symbol- they're not the only problem we face as passengers, but they are damned emblematic.) I was always uncomfortable recommending that people use private, profit-making companies instead of driving, but I could at least cope with this if those companies made some effort. But if their greed, arrogance and complacency have reached such a level that they can't even be bothered to pay a plumber a few quid to unblock a toilet - a sum that is hardly going to dent their £109 million profits all that much - then screw them. That's right: screw them. I'm no longer going to recommend people use these "services", because frankly they aren't a suitable alternative to driving.

So is that it? Ian can't have a wee and so turns his back on the nation's transport problems in a sulk, thereby tacitly supporting untrammeled expansion of private driving? Well, no. The key issue here lies in our definition of "public" transport. At the moment we don't have such a thing. We have "mass transit", run for the benefit of a few Directors and shareholders, but we don't have "public" transport - transport systems operated for the benefit of the public. We have allowed ourselves to fall for the monstrous and evil lie that privatisation and deregulation of public transport offered benefits to the nation. Well, I've lived through the last 25 years. I've seen our public transport degenerate from an affordable and practical solution to personal mobility into a swollen badger's cock of a shambles which is solely focused on profit maximization*. I've travelled all over Europe and sampled public transport in at least a dozen countries, all of which do it better. So I'm here to tell you that privatization and deregulation have not worked. At least not for the British public (the funds of political parties may be another matter). When we have public transport again, I can recommend it. Whilst our services are cynically run as fourth-rate monopolies, with the full encouragement of the government, who award the franchises without even pretending to put the public's interests first, I'll have nothing to do with them.

As for how I personally will travel from now on, I have a plan. Watch this space.

* True fact: when First took over running Bath Spa station, they saw nothing wrong with making the platform staff wear jackets marked "Revenue protection officer". The people who used to be "guards" - i.e., there to look after the customers - were now officially there primarily to make sure First didn't miss a penny of their lovely lovely profits. I mean, even if the staff are there just to assure profits, it takes a very special type of not giving a shit to rub our noses in it like that, doesn't it?