The first work of sociology I ever read was Power, Crime and Mystification by Steven Box. It is an accessible and compelling work in which he argues that criminality is defined in such a way as to maintain the status quo in a society. His thesis is that by defining what is and is not criminal behaviour in very specific ways, the rich and powerful help themselves stay that way at the expense of the poor and powerless. So the same act gets classed as criminal or benign depending on who does it. If a drug addict snatches £50 from me on the street, that is a crime and if the 'thief' is caught they'll likely go to gaol. If, on the other hand, I lose the same £50 because an insurance company took it from me as a premium, knowing they had put some impenetrable clause into the contract for the purpose of not paying out claims... well, don't expect to see anyone in court any time soon, even though the money was deliberately taken from me in just the same way as in the mugging. Indeed, the insurance company's act is much more premeditated than the addict's and so arguably worse.

Other, more dramatic, examples surround homicide. If I stab or shoot somebody in a moment of passion (were I subject to such things), I'll likely be locked up for life. But think how much more time and effort the justice system would make to solve and punish my lone murder (which is unlikely to be repeated) in contrast to the big fat nothing it does to sort out the many many car companies who are selling cars right now which they know will kill people horribly. These deaths are being caused by people's deliberate actions. Are the innocent victims somehow less dead than in the murder? Of course not. Could the deaths be prevented by the criminal justice system? Absolutely, if it wanted to. 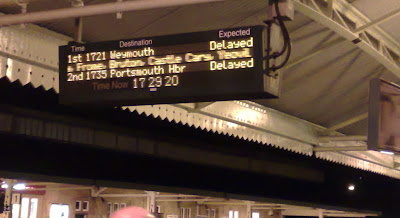 I've been pondering these issues recently in the context of public transport. I've already written on more than one occasion about the government's complicity in Britain's public transport woes, but I think the way Train Operating Companies work is a lovely example of Box's principles in everyday life. When I buy a train ticket, I pay a sum of money to be taken somewhere at the scheduled time. If I do not carry out every single part of my obligation - if I pay no fare, or only part of it - the system will make sure I end up in court where I will be fined, publicly humiliated and given a criminal record. The stations and trains are full of posters reminding me of this fact in gloating tones*. But if the Train Operating Company does not carry out its obligation in this deal they are held to have done nothing wrong when they take my money from me. Indeed, they can take my money knowing their service is not available and this doesn't even tiptoe around the herbaceous border of criminality, even though in other circumstances the same behaviour would be called theft, or fraud. The asymmetry of the situation, in which the corporation is favoured over the individual by the criminal justice system for the same act, is staggering when you think about it.

So what's the lesson here? It looks dangerously as though full reordering of our society is needed, so let's steer away from that and instead conclude this: If First's trains ran on time, and weren't mysteriously cancelled in the middle of nowhere half-way through their journeys leaving customers sitting around on wind-blasted platforms on cold nights, passengers wouldn't have time to think about sociological issues and then write about them in public. Yes, there's the moral right there. Jolly well done. Oh, and whoever has my copy of Power, Crime and Mystification, can I have it back please? Ta muchly.

* "Mr P from Whitchurch thought he could save £27 by not paying for his journey to London. We disemboweled his daughter and fed his cat to a crocodile ha ha ha."